Today It’s All About You 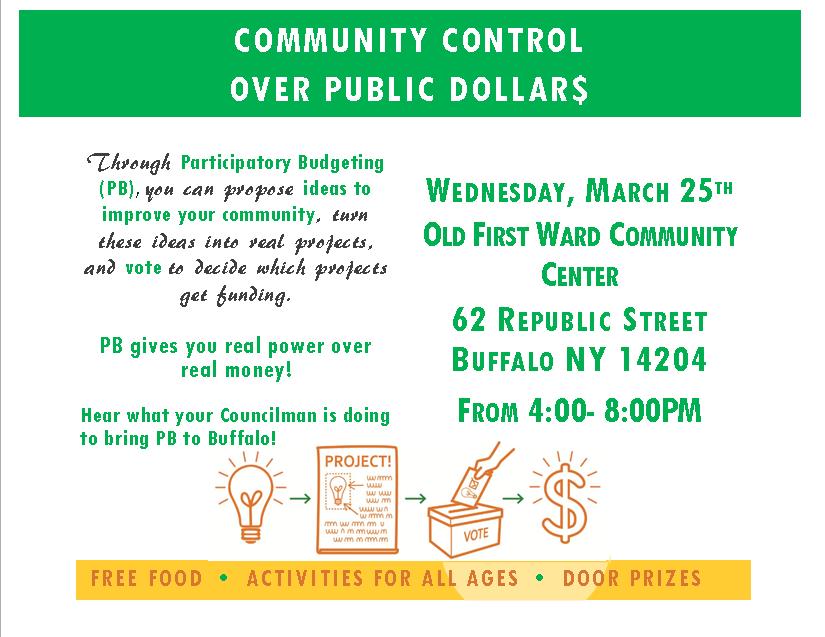 If you’re in Buffalo, then hopefully you know about the great work that Clean Air Coalition and the Common Council’s Participatory Budget Committee have been doing to bring direct democratic control to the people of this city.

For those of you who have been following this exciting progress, tonight’s open house is a great opportunity to learn more. And to those of you that participatory budgeting a new concept, tonight is a great chance to get acquainted.

The Participatory Budgeting Project, a New York city based 501(c)(3), has provided assistance to various projects throughout the continent, including local partners. Participatory Budgeting’s highest local profile to date has been Clean Air’s large scale public process and voting to gauge community support for the distribution of funds from the Tonawanda Coke environmental violations settlement.

In a pure Participatory Budgeting process, the amount of funding available is established and communicated at the outset and projects are funded in the order of priority assigned by the community through the voting process until the funding is exhausted. On many occasions, though, by raising the profile of and interest in community needs and opportunities, even projects not funded through the Participatory Budgeting process have been taken on by other funding sources.

Traditional planning processes disconnected from the budget process can often create “planning fatigue” particularly in low-income communities where residents may succeed in having their knowledge and vision reflected in planning documents, but these have rarely resulted in direct, tangible neighborhood investment. This cycle has created distrust, suppressed engagement – particularly among low-income families and people of color – and produced a cadre of “usual suspects” that tend to dominate public process.

At the same time, capital investment for community development has too often benefited private interests without fundamentally addressing the concerns or needs of a neighborhood or catalyzing spin-off investment and long-term improvement.

Participatory Budgeting is a clear and direct way to engage communities and live into a planning practice that puts local first and reflects that fact that communities members know their neighborhoods better than anyone else. And the direct link from community to on-the-ground change creates a snowball effect of increasing community pride and civic engagement.

Come out tonight and learn more…

Thanks to Clean Air and the Common Council PB Committee for leading this charge!