Is Buffalo’s peculiar housing stock in part responsible for its own decline? 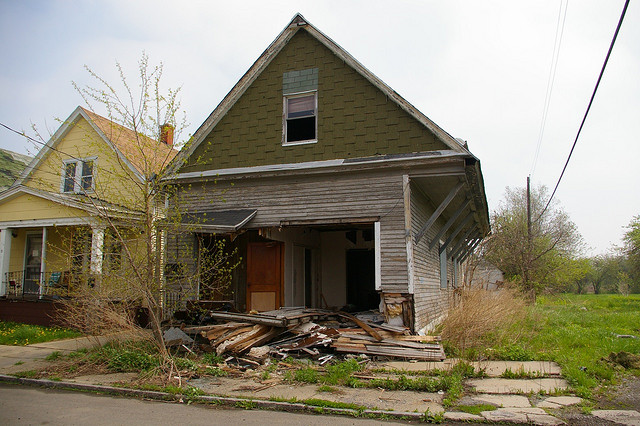 If you hang out in community development circles (and, let’s face it, if you’re reading this you most likely do), then you’ve heard Buffalo has among the oldest housing stock in the nation.

In fact, Buffalo actually has the oldest housing stock for any large city (100,000+ units) in the U.S., with 64% of its units built prior to 1939. Without being retrofitted, these older homes are generally lacking in insulation and carry disproportionately high utility bills. In addition, the presence of unmitigated lead paint is rampant, also leaving Buffalo with disproportionately high instances of lead poisoning.

But Buffalo is unique in another regard. Though a relatively dense city, a very high percentage of Buffalo’s housing units are in houses as opposed to apartment buildings, with a higher portion of two-family houses than any other city. [Suffice it to say it’s a lot, but check the footnote if you really want to wonk out…]

Buffa-lore also holds that the city’s houses were being built as UpState NY was being deforested. The lumber that was floated down the Erie Canal made it the cheap building material of choice, leaving the city with few masonry structures. As noted we noted in the One Region Forward Fair Housing Equity Assessment:

“This type of housing stock has proven difficult to regulate and difficult to preserve as it has aged, in part because of a large and dispersed ownership of often under-capitalized and inexperienced landlords. In a city of larger apartment buildings, an enforcement action (i.e., housing code violation citation or court case) against a landlord may impact an average of 5, 10 or many more units. However, in Buffalo or Niagara Falls, each action may only impact one or two units on average. Further, though larger apartment buildings generally require some substantial capital outlay for acquisition, as the city’s neighborhoods’ housing markets have fallen into decline, many houses have been purchased for a few thousand or even hundreds of dollars.

This has made real estate speculation rampant in some areas. With low levels of initial investment (and, hence, little risk), exploitative landlords have milked properties of their value by failing to perform maintenance or make repairs but meanwhile collecting rents until the properties become unlivable. At this point, some of these owners simply stop paying taxes and walk away, having profited from their transaction, leaving the City, the neighborhood and the neighbors to deal with the problems they have created. Others have sold these properties to unsuspecting buyers, often from out of the area, which has triggered a rash of fraudulent flipping in recent years.”

In addition, one-unit and two-unit houses have too often been exempted from fair housing regulations, essentially allowing discrimination and segregation to persist without consequence.

As an outlier, Buffalo continues to suffer from policy that was built for other areas and other conditions. Much of New York’s housing law and housing assistance programs, for instance, were built around the conditions found in New York City. In another example, the Federal response to the sub-prime foreclosure crisis funneled millions more to an acute crisis of real estate speculation in Mesa, Arizona, rather than Buffalo’s long standing, if slow moving, vacancy crisis.

Yet, planted in Buffalo’s old, small-scale housing stock are also the seeds of revitalization. A new wave of industrious residents and neighborhood organizations have been able to lay claim to a small piece of the city and begin to rebuild: house by house, block by block.

Various organizations and agencies have also been battling these policy loopholes, and instituting policy changes to help regulate and revitalize properties in neighborhoods across the city. There is much work remaining, but because of their efforts, the city’s real estate market is a far cry from the Wild West(ern New York) that it was even eight to ten year ago.

*Footnote for wonks: 72.8% of all Buffalo housing units are in single family detached or 2-family structures, second only in percentage to Bakersfield, CA for cities with more than 100,000 housing units. Buffalo is 1st in the country for percentage of 2-unit structures among the 561 included in the 2012 American Community Survey at 40.2% of units. The next closest city is Paterson, NJ at 35.5% and among those with 100,000 or more units, Jersey City is second at only 23.9%. For more than 4 units, Buffalo has the second smallest percentage (15.8%) of cities with more than 100,000 units, once again behind Bakersfield (13.2%).