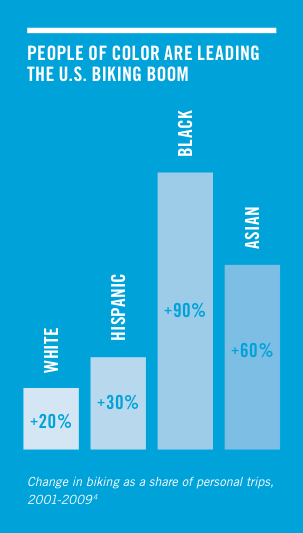 “We define racial equity as both an outcome and a process. A racially equitable society is one in which race no longer determines one’s life outcomes and in which we recognize that when we address inequity, we all share in the benefits of increased fairness and justice.”

For today’s post, Make Communities is going to cede it’s time to Simran Noor, Director of Policy and Strategy at the Center for Social Inclusion.

As mentioned briefly in Friday’s post, the National Bike Summit this year focused on Bikes+.

In developing nations, the bike is very consciously seen as a tool for liberation and uplifting people in poverty, in ways not that dissimilar to the impact that bicycles had toward “free, untrammeled womanhood” in the early 20th century here in the States. As Ms. Noor points out, though, as it is swiftly gaining traction in this country the Bike Movement is too often seen as a white, middle-class, male phenomenon even though stats consistently show that people who ride bikes do, in fact, represent a broad demographic cross-section with the steepest increase in riding coming from communities of color.

In her excellent summary of her comments to the National Bike Summit, she highlights five places that the bike movement can focus to demonstrates a commitment to racial equity. The bullet-points are listed below, but to do them justice, click through and read the full post: