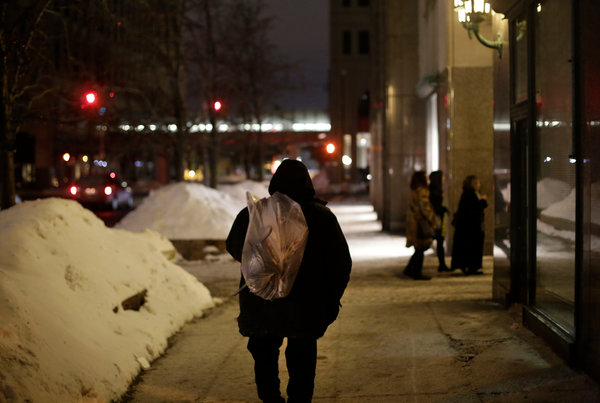 Sunday’s NYTimes features an article on the rise of metal scrapping in Detroit, and the measures that the city is taking to end — or at least limit — the practice.

There are basically two kinds of scrapping: one that picks up various discarded metal objects (left on the side of the road, in dumpsters, etc.); and one that actively strips metal that is still belongs to someone, even if the someone remains legally unclear (from metal yards, from vacant buildings, etc.)

For those who scrap as a way of life, there is not necessarily a hard line between the two.

The Times follows Robert Jones Jr., “homeless and jobless for more than a decade”, as he tries to get by on trash picking and metal scrapping, among other odd jobs.

His foil, Sgt. Rebecca L. McKay, oversees the Detroit Police Department’s response to scrapping, going after both those who strip buildings and the scrap yards that purchase illegal materials.

Sgt. McKay plays the role of policing those who definitely aren’t living like kings in the “new” Detroit.

Jones, explicitly says he doesn’t see opportunity for himself in the talk of the city’s revival, or in the urban farms run by white college kids popping up in his neighborhood.

The article does a great job of opening up the incredibly trying dynamic of a city attempting to maintain its grip on a neighborhood where order has long since been lost.

The undercurrent is the preservation of the past, and the assets that remain, with an a eye on a brighter future.

The complication, though, is in the question of what the present holds for the residents who can’t wait for tomorrow.