The Obama administration released new requirements for those receiving federal housing support that, essentially, instruct these local governments to make an honest effort to end policies and practices that reinforce housing segregation.

Coming nearly 50 years after the passage of the Fair Housing Act, it’s hard to fathom this is being framed by some as a controversial move.

Time and time again, segregation and economic isolation have been tied to lower achievement in education, lesser earnings and fewer career pathways, and lower quality of life, cementing a striated social structure that was a deliberate product of 20th century U.S. social policy.

Yet, we are trapped in a through-the-looking glass moment where the pervasive inequality in this country is so shrouded in stereotypes, misinformation and willful denial that the victims of an unequal system are too often blamed for its outcomes. 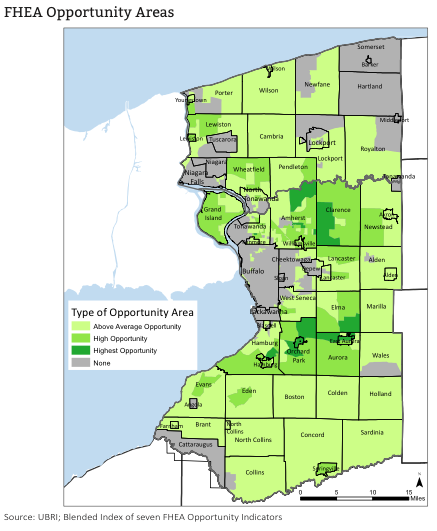 Last year, Make Communities coordinated a cross-sector team that examined challenges to racial and ethnic equity in Buffalo-Niagara through a Fair Housing Equity Assessment. This group also compiled recommendations for reducing segregation in the region (ranking among the worst in the country) and improving access to opportunity for all residents. At a high level these recommendations called for reforming the regulatory framework, which this Obama administration rule begins to do, but also called for specific actions to: ensure public input on public investment; provide equitable distribution of, and access to, public resources and service delivery; build capacity for equity advancement; and enhance equity education and promotion.

An article from the Washington Post highlights a similar effort in Chicago, and many of those same metrics and maps from the article can be found for Buffalo Niagara in the One Region Forward Fair Housing Equity Assessment available here.

Today the Buffalo News also published an article about the deep and persistent segregation in the region. While the focus of that article is on the impacts of the Obama administration’s new rule, it is clear that no single action or regulation is going to solve the wicked and persistent problem of racial segregation and concentrated poverty in any region.

Hopefully the administration’s action, like the local report and recommendations mentioned above, will be part of an ongoing dialogue that — at a minimum — highlights the issue and forces us to stop avoiding these problems. We cannot continue to pretend that we are helpless bystanders in the slow-motion humanitarian crisis at our doorstep.

It is clear from the outcomes in our communities that segregation and discrimination in our country and our region are far from solved.

We need to make just as clear in our policies and our actions that we do have control over these disparities and we are not content to let another generation go by without deliberate and aggressive action to bring truth to the promises of equality, justice and opportunity for all — not just those who are white enough and wealthy enough to afford them.